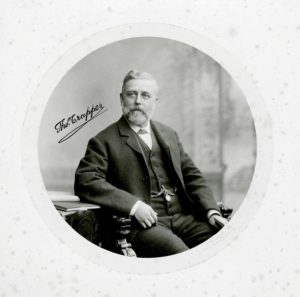 Owner of the first bathroom showroom, Thomas Crapper publicised the toilet at a time when no-one spoke of such ‘necessities’.

Born in Yorkshire in 1836, at the age of 14 Crapper was apprenticed to his brother, a Master Plumber in Chelsea, setting up as a plumber in his own right in 1861. He quickly gained a reputation for quality and service and by 1907 had established a flagship store on the King’s Road in London.

Throughout his career, Thomas Crapper relentlessly promoted sanitary fittings and championed the ‘water-waste-preventing cistern syphon’, in particular. Innovative thinking may have advanced the WC to a level where it is now largely taken for granted domestically, during the 1800s Thomas Crapper registered a number of patents, including the ‘Disconnecting Trap’ which became an essential underground drains fitting. His idea for a spring-loaded toilet seat was less successful however, becoming commonly known as ‘the bottom slapper’ and quickly ceasing production.

Having held four royal warrants and existed through five reigns over 150 years, Thomas Crapper & Co. continues to manufacture quality bathroom fittings today, 107 years after the death of its founder.