There have been some disastrous interior design trends. Who remembers fuzzy toilet covers and shag pile in the bathroom? But when it comes to the worst interior design trends, the UK public turned their noses up at leopard print soft furnishings, taxidermy and avocado bathrooms, says new research conducted by British Ceramic Tile as part of National Tile Week (10-17 April 2017).

Sorry Bet Lynch but leopard print interiors just don’t cut the mustard, with those surveyed naming it as the worst interior design trend they had seen in the last 10 years. Taxidermy came in a second with Brits appalled at stuffed foxes and family pets on the mantelpiece. The much-maligned avocado bathroom was a close third, reminding homeowners of a bad 70s movie.

Forget extravagant bachelor pads or minimalist, elegant design, when it comes to celebrity style, consumers want a house like Jamie Oliver. 30% of homeowners surveyed stated that they would want a home and kitchen like the great Mr Oliver himself – lived in, homely with a touch of shabby chic! 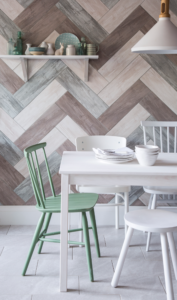 70% of British women undertake interior design in the home with only 30% of men allowed a say in the overall look of their five walls (don’t forget the floor). Yet when it comes to the decorating, it’s an even split 50/50 as to who decorates the house with men and women sharing out the decorating duties.

When asked which room would they most like to decorate, both men and women highlighted the living room as the one area they’d most like to makeover with the kitchen and master bedroom in joint second.

What men and women want

While we may all think that a red room of pain is now at the top of a bloke’s wish list, it would seem that they still prefer entertainment for one rather than two! The survey revealed that when it comes to creating a palatial home men would give anything to add a games room, library and home cinema, rather than mirrored ceiling.

When it comes to the female of the species, it’s more about glamour and luxury with women wanting to include a walk in wardrobe, swimming pool and wrap round balcony to their dream home.

The research also revealed that London was viewed as Britain’s most design conscious city. No surprise to many with London being home to so many examples of well-known British design, but what was interesting from the research was to see cities such as Manchester and Birmingham in the top 5, beating off competition from picturesque cities such as Bath and Durham. Manchester was voted Britain’s second most design conscious city with Edinburgh third, Liverpool fourth and Birmingham fifth.

Buckingham Palace was chosen as Britain’s most iconic design building. The official London residence for the royal family since 1837, Buckingham Palace attracts over 400,000 tourists each year and was a sure fire hit with those surveyed picking tradition and history over modern, cutting edge design. The Shard was voted Britain’s second most iconic building, with Edinburgh Castle and York Minister also making it into the top 5.

The survey has been released by National Tile Week and British Ceramic Tile as part of a week-long nationwide event that celebrates the best of British design and manufacture. Designed to educate homeowners on how to creatively use tiles in the home, National Tile Week examines the latest trends sweeping through interiors, and will bust some myths about the complexity of tiles as well as provide practical tips, making DIY projects easier than ever before.

Yet another patent for ESSE’s hand-built British technology!

With all the talk of AI and how that will affect our work life, it’s good news to see…