InstantAqua introduces the most revolutionary shower technology in 30 years

Mixer shower technology in existing electronic shower systems has not been improved in the past 30 years. The few improvements that have been made are limited to installing technology units behind shower walls and above ceilings or concealing them in bathtub casings. These adjustments require the relocation of water pipes behind walls and therefore retiling as well. 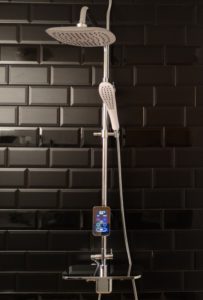 “All revealing and unconcealed”
This is about to change, now that Dutch development company InstantAqua will be introducing the most revolutionary shower technology in 30 years, at the ISH 2017 in Frankfurt, Germany. This technology, named SmartShower Art, is based on the principles of ‘stand alone’ and ‘plug and play’, and on a new concept in bathroom aesthetics, in which the electronic shower systems is regarded as a work of art on the bathroom wall. Or, as InsantAqua’s managing director Jurgen Verwoert describes it: “All revealing and unconcealed.”

Easily fitted
InstantAqua, which was founded in 2008, has been working on the development of an electronically controlled shower system for 5 years. The system features an entirely new digital mixer shower technology and a touch display that can be operated in the shower and still function perfectly. SmartShower Art’s technology is so small that the shower system can be fitted easily without damaging walls or ceilings – stand alone. “You simply replace the existing mixer shower with the SmartShower Art system, install the SmartShower Art app on your smartphone and enjoy your shower – plug and play. That’s all there is to it,” Verwoert explains.

Operate with the tap of a finger
Operation of the SmartShower Art’s display is very much the same as that of a smartphone – with the tap of a finger – and yet, there is one small difference. The display does not require a central button to be activated and will operate once your hand is within a radius of 30 centimetres. The display looks somewhat like a chrome mirror, on which the data collected by the SmartShower Art is projected from 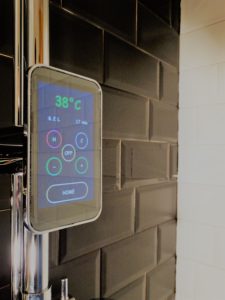 behind. This, together with the new mixer shower technology, gives the SmartShower Art its modern and sleek looks.

Connected to the Internet
The SmartShower Art is connected to the Internet via WiFi, which enables it to exchange information with a desktop computer, tablet or smartphone, on for example: water use in litres or gallons, outlet temperature, shower duration. This makes it ideal for personalising your shower experience at home, or for use in the hospitality and healthcare sectors. Would you like more information? Visit the website: www.instantaqua.eu or visit the SmartShower Art stand at the ISH 2017 in Frankfurt, Germany from 14th to 18th March for a hands-on demonstration.