Wholesale Domestic, the family-owned bathroom goods supplier, is consolidating its leading role in the UK e-commerce revolution by opening a new 133,000 square foot new facility in Hillington, outside Glasgow.

The newly-refurbished premises, close to its existing 45,000 square foot outlet, is expected to 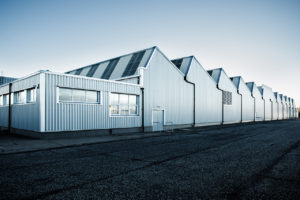 create up to 40 new jobs by the end of 2017. The newly-refurbished storage depot and showroom, which opened its doors on Boxing Day, marks a major landmark in the company’s drive to transform itself from a trusted local family business to a leading national bathroom supplier.

Wholesale Domestic which has had a base close to the new facility in Hillington since 1990, has seen turnover double since 2012, largely on the runaway success of its online sales operation. The £3.5m investment in storage space and stock-picking technology in the formerly derelict warehouse will allow the firm to grow at a projected 20% per year, putting it at the forefront of Scotland’s small but growing contingent of e-commerce pioneers. 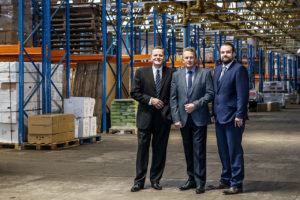 The Toward family, which launched the business in 1963 is pursuing a two-pronged local-plus-national strategy aimed at both B2B and B2C customers, giving access to the current 5000 product lines held in Wholesale Domestic’s own stock, while giving web customers access to up to 30,000 products through e-commerce partnerships with other national suppliers, with free delivery on orders over £500.
Main product lines include bathroom suites, furniture, baths, showers, taps and accessories.

Walter Toward, who co-owns Wholesale Domestic with his brother Derek and nephew Brian said that the company’s strategy was to consolidate its West of Scotland offline customer-base, which includes the plumbing trade, while continuing to invest in the e-commerce operation. He said: “Our business is all about trust. We have built a relationship with our local customers and we want to replicate that at a national level.”

Current areas of focus include improving the order-taking, stock control and fulfilment systems, all with the eventual aim of making the company the leading pan-UK bathroom supplier.

The firm, which was commended in the 2015 Herald Family Business of the Year and which has elsewhere won wide recognition for its sponsorship efforts and contributions to local charities, has also innovated in a highly successful trade loyalty scheme, offering cashback rewards on its thousands of trade accounts for repeat or bulk business. New benefits to account holders in a redesigned loyalty programme will be announced later in 2017.

In addition to its current “Winter Event” discounting drive, which ends on 28 February, Wholesale Domestic has also introduced a 0% interest credit scheme in conjunction with Hitachi Finance, offering up to 3 years interest-free credit. The scheme has already generated £100,000 in extra sales.

Walter Toward said: “The physical premises is important for our trade customer base, many of whom bring their customers here.
“We are in the process of reinventing ourselves as an e-commerce leader by acquiring the scale needed to become a national company. With e-commerce at the forefront, our strategy is to look after our existing customer base while making the new base into a model logistics operation that can be replicated elsewhere in the country. With our narrowed supply chain, and the improved purchasing power we can ride out currency fluctuations better, and this new capacity gives us the ability to buy more at better prices. The new Hillington facility is now the beating heart of our operation, in all channels, the stock and back-up will be co-ordinated from here.”

Adapting itself to the new “buy today to fit tomorrow” market dynamic, Wholesale Domestic, working with its logistics partner Palletways Network, and supported by leading Glasgow e-commerce specialists INDEZ, is planning a series of business process improvements that will allow it to beat the competition in a highly competitive market. These include new 7am-9pm working hours to help service customer enquiries and allow early pick-ups by trade customers and the introduction of next-day delivery in the first half of 2017.

The new investment has also allowed Wholesale Investment to take on 16 extra staff in warehousing, sales and e-commerce support functions. The firm has plans to employ another 25 full-time staff in the next year.

In addition to its supercharged sales performance, Wholesale Domestic has won national awards for its work with young people with challenging routes to work.

Derek Johnstone, head of employer engagement at Tigers, the employability training provider which has partnered with Wholesale Domestic on supporting its staff needs said:

“Tigers has been working in partnership with Wholesale Domestic over the last 2 years and we have developed an excellent working relationship which has given young people the chance to engage with an employer who is keen to give young people the opportunity to progress through work experience placement to employment.

“Brian and his team have been great supporters of the Certificate of work readiness program and continue to give genuine opportunities of employment to young people and help to guide them into the world of work. I look forward to continue working with Wholesale Domestic in the future.”

Enter now while you can