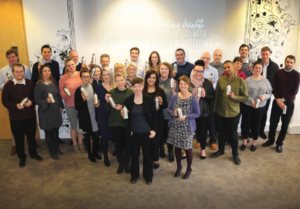 Franke has launched a major new campaign, ‘Refill Not Landfill’ aimed at contributing to greater awareness of the need to reduce the use of plastic water bottles in everyday life. Working on the premise that small individual actions can develop quantum and make a difference, the campaign is designed to have a ripple effect engaging Franke staff, retailers, distributors, suppliers and consumers. 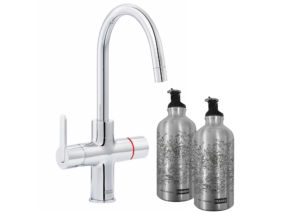 The initiative was previewed at the recent KBB exhibition on the Franke stand and will launch on 1 May and run for six months until 31 October. The campaign will harness the support of their retail partners nationwide with consumers receiving two free water flasks on purchasing any Franke, or sister-brand Carron Phoenix, tap that includes filtration during this period. Eligible taps include all Franke FilterFlow, Minerva Electronic 4-in-1, Omni 4-in-1 and Omni Duo boiling water taps, as well as the Carron Phoenix Dante Tri-Pure and Dante Pro models.

Each flask holds half a litre of water, a quarter of the recommended daily intake, and its lightweight metal construction makes it easy to carry, while being small enough to use ‘on the go’ and fit easily into everyday life in handbags, sports bags, rucksacks and cup holders in cars. Featuring the signature Franke Make It Wonderful graphics, the flasks are robust and hygienic offering a safe and inexpensive way to help keep the body hydrated through regular re-fills and re-use, while crucially reducing plastic waste.

All Franke staff have been have given flasks with the company committing to eliminating single-use plastic bottles from its offices from May onwards.

“We know that millions of plastic bottles are littered, landfilled or incinerated every day. But we also know that people are now more attuned to taking personal responsibility for their actions, rather than waiting for legislative regulation, and we have launched this campaign as our corporate contribution. Making small changes to behaviour is very easy to do and can make a huge difference. Switching from single-use plastic water bottles to re-usable flasks will help to reduce the impact plastic is having on the environment.

“For example, if we were to send just 1,000 of our flasks to consumers during the campaign who are in the habit of disposing of one plastic bottle per day, then we would be taking 365,000 plastic water bottles out of circulation in a single year. That in itself is a significant amount and the amplification of the numbers has the potential to be very dramatic indeed.”

Dedicated POS strut cards for both Franke and Carron Phoenix brands have been designed for use in-store encouraging consumer awareness and engagement. The campaign will be supported by PR, social media activity on Twitter and Facebook using #RefillnotLandfillUK, consumer giveaway competitions, together with bespoke adverts online and in trade and consumer home interest titles.

Did you know? From Ideal Bathrooms